The networking protocol in the ZNM modules is ZigBee® based on the Z-stack from Texas Instruments.

The ZigBee® protocol is an open RF standard operating on the 2.4 GHz frequency. ZigBee® is particularly useful for low-data rate, low-power, wireless communications for Machine-to-Machine (M2M) and Internet of Things (IoT) networks worldwide.

ZigBee® uses a mesh topology network architecture where each node relays data for the network and all mesh nodes cooperate in the distribution of data throughout the network.

In contrast to Wi-Fi networks — used to connect endpoints to high-speed networks — ZigBee® supports much lower data rates and leverages its mesh networking protocol to eliminate hub devices and create a self-healing architecture. 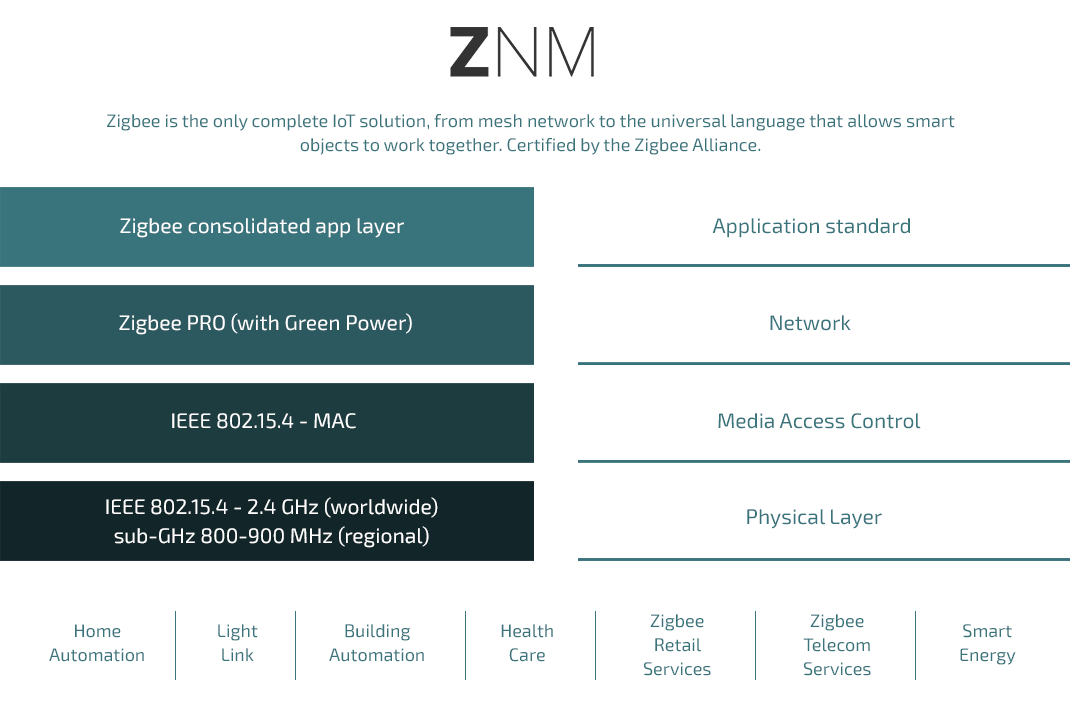 Radiocrafts’s ZNM is a protocol based on the TI Z-stack (http://www.ti.com/tool/z-stack) that is fully ZigBee® compliant. The ZNM protocol creates a configurable overlay on the Z-stack, reducing the device manufacturer’s programming to a minimum while maintaining ZigBee® compliance.

The ZigBee® protocol defines three types of nodes: coordinators, routers and end devices. Although all nodes can send and receive data, they each play a different role.

ZNM has a defined data rate of 250 kbit/s, suitable for intermittent transmissions from a sensor or input device. Transmissions are secured by 128-bit symmetric encryption keys.

Due to its low-power, ZNM modules have limited transmission distances; ranges can vary from 10 to 100 meters line-of-sight, dependent on the environment and RF power output. Nevertheless, when used in a mesh network of intermediate devices, Radiocrafts ZNM modules can effectively transmit data over long distances.

A full description of how to configure a Radiocrafts ZNM module can be found at our document library.