What is the best way to connect Radiocrafts’ Industrial IP Mesh solution, RIIM, to the Internet?

Radiocrafts has just released a new application note, AN046: Connecting RIIM to the Internet, where we show you 4 of the most commonly used connectivity options, presenting each option’s building blocks and pros and cons! 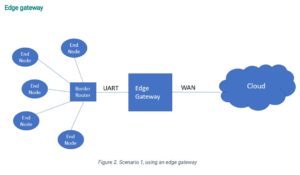 This scenario includes a RIIM network, an edge gateway, and a cloud solution.

One major benefit of this scenario is the flexibility and simplicity the user has as RIIM is compatible with a wide variety of gateways, many of which are out-of-the-box compatible with certain cloud solutions. The gateway can be a specific IoT gateway, a PLC, Raspberry PI, or a computer.

You can read more about this in our application note, AN036: RIIM with Edge Gateways. 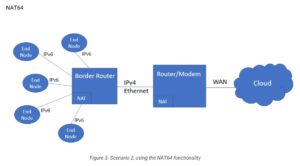 This scenario includes a RIIM Network, a router/modem, and a cloud solution.

The strongest advantage of this solution is the low complexity required to achieve end-to-end connectivity. During network operation, when a RIIM node wishes to send a packet to the cloud, the packet first reaches the Border Router. The Border Router registers the IP address of the transmitting node and assigns it a port number. This entry is then saved in the NAT of the Border Router.

This scenario includes a RIIM network, a Linux box, a 4G router or modem, and a cloud solution.  This scenario is used when you have strong security requirements and less need for edge computing.

The strongest advantage of this solution is that the complete link, from the RIIM leaf node to the cloud, is end-to-end IP. This automatically translates to higher security as the packets are not decrypted anywhere in the middle of the link.

Another important advantage is the global IP addressing. Since the whole solution is based on IPv6, any node can be addressed easily, without the need for NAT and complex IP address mapping.

This scenario is the exact same as the IPv6 Through SLIP except for the use of a cellular module instead of a complete router/modem.

This setup is suitable when the user is using a Linux-based cellular module supporting IPv6, while being in a country where cellular networks support IPv6.

To learn more about these connectivity options, you can read our application note, AN046: Connecting RIIM to the Internet.

If you wish to test the different options yourself to get a deeper insight, we recommend you order a RIIM development kit!

You can order the development kit here.