Radiocrafts is eager to share this new exciting video released by the University of Cardiff on the Cryoegg, an egg-shaped device with a Radiocrafts module inside which is able to measure melting water up to 1.5 kilometres beneath the ice sheet of a glacier in Greenland. 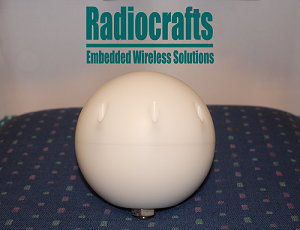 The Cryoegg was designed to give researchers information on the way that glaciers slide towards the ocean, but specifically, it will report on the behavior of meltwater that runs beneath the ice. This meltwater facilitates the flow of glaciers in the ocean. The Cryoegg will measure water temperature, pressure (measures structural organization of the water under the ice sheets), and conductivity (measures how long meltwater has been residing in a specific location) at the base of the ice sheet. 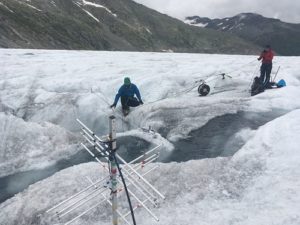 The Cryoegg has already been deployed and tested in several locations around Greenland and the Swiss alps and the measured results have been impressive so far. The Cardiff university researchers were able to get wireless readings up to a staggering 1.5 kilometres beneath the ice sheets of the glaciers. How is that possible? They use the RC1701HP-MBUS4 module from Radiocrafts which operates in the 169 MHz frequency. 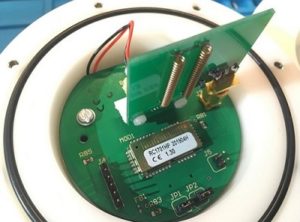 The 169 MHz band allows for good performance in terms of coverage, penetration, and consumption of battery, while still ensuring a sufficient bitrate. This is important in applications where propagation conditions are poor. Radiocrafts has seen a rise in popularity for the RC1701HP-MBUS4 module because it can be used in various applications where a device is placed in a “hard-to-reach” location and where propagation conditions are poor. Two notable and innovative solutions include using a Cryoegg to measure the water behaviour beneath the surface of a glacier, and, a new tank level measurement device from Alisonic for petrol tanks buried 1-meter underground. You can read about the Alisonic tank level measurement device here.

Read the datasheet for the RC1701HP-MBUS4 module here.

The RC1701HP-MBUS4 has built in support for antenna tuning, and we have released an application note AN025: Tuning the Antenna with Antenna Tuning Feature, to help our customer to create their own tuned 169 MHz antenna.

Read our blog post on why 169 MHz solutions are becoming essential for the sustainability of our growing cities here.

Read our white paper on LPWAN’s at 169 MHz here.

For more information on the Cryoegg and the project itself, you can contact Cardiff University via their contact page here.