We have also released pre-certified High-Power modules for RIIM for 868 and 915 MHz operation!

The combination of a mesh network with TSCH and high RF output power gives an unbeatable range and reliability for an Industrial IoT sensor network.

Radiocrafts Industrial IP Mesh (RIIM) is a long range industrial IoT wireless IP mesh network completely embedded in a module. RIIM was developed for you to easily create your own industrial grade access network with direct IP connectivity, either from a local server or from the cloud.

We have added a new PHY/MAC layer to RIIM which is a frequency hopping mode. This increases the reliability of the network, and also allows for higher radio transmission power (under FCC regulations) to get even longer range and radio coverage.

TSCH was designed to make a mesh with less packet collision and higher reliability as a packet lost between two devices will be re-sent on a different channel in next available time slot. A TSCH network has proven to have a reliability of up to 99.99% while normal single channel networks typically have less than 99% reliability.

Additionally, TSCH enables battery operated mesh routers. The radios can be shut down (“sleep”) in a period where there is no packet to send and no incoming packet expected.

We have also updated existing product documentation to reflect the new RIIM SDK. These documents include:

We have also released two new High-Power modules for RIIM:

Benefits of the RIIM High Power Modules Include:

You can read more about the RIIM network benefits and features here.

You can download the datasheet for the High-Power modules here. 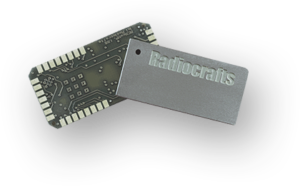 RIIM™ targets networks where fast time to market and low engineering effort is desired. A few examples include:

We recommend that you buy a RIIM Development Kit in your early stage product evaluation. The development kits are designed to be easy to use and to very quickly support a wireless link or network, where you can make a good analysis of the network performance.