The simulation results confirm that a RIIM network takes an exceptionally short time to form. A huge network of 1000 nodes required only 19 minutes to be fully formed! The network was fully formed 9 minutes after the last node joined the network.

The simulation results also confirm the low latency capabilities of RIIM for both multicast and unicast messages. Multicast is a feature in RIIM which allows the Border Router to broadcast messages, and the child nodes repeat this message to ensure that even the most remote node still gets it.

The average time observed for the 5 multicast messages was a remarkably low 27,899 seconds!

The alternative to get a message reliably to 1000 nodes is to address each node one by one. This will take 0.5 to 1 seconds per node. Multiply this with 1000 and you see that the complete operation takes 500-1000 seconds. Therefore, Multicast is of utmost importance in street lighting applications as they are the means by which the core management system will quickly and reliably send messages to the entire network, for example, “turn lights on/off messages”. 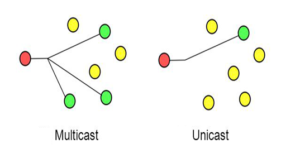 Unicast refers to messages sent from a child node to the border router. The highest average value for a unicast message was as low as 900ms! This means that in a network with 1000 nodes, the Border Router will receive messages from the furthest node (20 hops away) with an average delay of just under one second.

In addition, RIIM proved to be a highly reliable solution for Street Lighting. Since the network has 1000 nodes, sending a unicast message every 4 hours, it can be concluded that a total of 6000 messages were sent. Out of these 6000 messages, only 3 messages were lost! In other words, 99.95% of the messages were successful!

From the simulation results we can confirm that Radiocrafts’ Industrial IP Mesh Solution, RIIM, is a highly efficient solution for Smart Street Lighting Applications due to its quick network formation, low multicast and unicast latencies, as well as the high reliability.

You can read more about the simulation results and conditions in our application note number 38: Performance of RIIM in Street Lighting: Simulation Results.

You can also read about the simulation results and why RIIM is a highly efficient solution for street lighting in our Smart Street Lighting Applications Page.

If you are considering using RIIM for your Street Lighting application, we recommend you buy a RIIM development kit early on in your product evaluation.