A large mesh network can have hundreds of nodes where sometimes, a collective message needs to be sent to all devices or a large group at once. Sending a collective message is important when you want to update a certain parameter in the entire network, for example, sending a “DIM UP” message to a street lighting network or a “Turn off irrigation” message in an agricultural watering system. There are a few ways this can be done, but the most efficient way is by using a Multicast Protocol, where a message is sent once, and that message is propagated to the entire network.

Therefore, in this blog topic we will discuss the two ways (Unicast and Multicast) in which a collective message can be sent to all devices in the network and compare their pros and cons, then we will explain why Multicast is important for mesh networks, and finally, we will provide an example where Radiocrafts simulated a street lighting network where we sent multicast messages throughout the network. 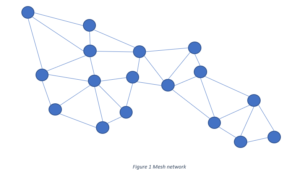 Sending a collective message can be handled in different ways. For example, it is possible to address each node individually through unicast. This method, however, is time consuming and inefficient as the same information must be passed down the network many times over.

A second option is to use a multicast protocol which enables the message to be sent once, and lets it propagate the entire network. Historically, this has been done through “flooding” of the network. Flooding is a concept were each and every node broadcasts a given message when it receives it.  The concept is illustrated in Figure 2. 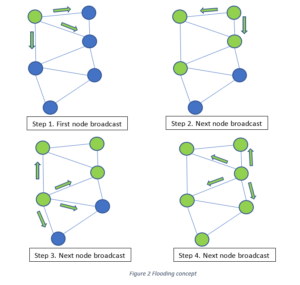 The challenge with “raw” flooding is that there is no acknowledgement and retransmission of the message. So, in a scarce mesh network with some packet loss, challenges can easily arise in which some of the nodes do not receive the multicast message. So, multicast through raw flooding ends up being an unreliable method to communicate to a large set of nodes. 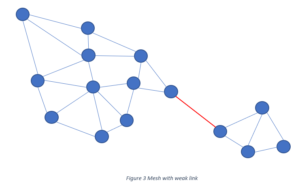 However, there is a smart way to enhance the performance of flooding multicast. In 2016 IETF issued a suggested solution with a new standard RFC7774. The standard presents a new way to do multicast in a low power and lossy network which includes retransmission of lost packets. It is named MPL (Multicast Protocol for Lossy and low power networks). The main concept is easy, but all the details can be quite complex.

The protocol enables the option to do proactive forwarding. This is like flooding except, in addition, it supports a tuning parameter to say how many times a message shall be forwarded from each node. Each multicast packet also has a sequence number that helps to track each packet.

In addition, there is the concept of MPL control packets which send regularly between the nodes. These are synchronization packets which compare how many multicast messages each node has received from a given node. If one node has received more multicast packets than their neighbor, this missing message is then forwarded several times. This is the reactive forwarding that happens when a multicast message is not spread to all devices.

This method gives much higher reliability than flooding and it means that the message can survive longer in the network. Each node must store a message in case, later on, a neighbor node reports that it has not received the message.

Furthermore, the more times a node engages in proactive and reactive forwarding the more packet traffic will be generated in the network. So, sending several repeated multicast messages within a short interval is not compatible with large networks in the MPL protocol.

Why Multicast is Important for Mesh Networks

Let us use street lighting as an example as to why multicast is important in a mesh network. In a street lighting application, remote configuration management is essential because it enables software upgrades over the air or other mass distribution messages to reduce the on-air communication time. 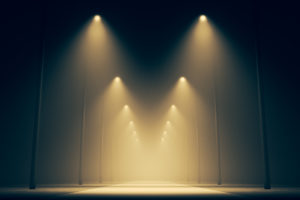 In addition, in a large network of many hundreds or thousands of nodes, Multicast makes it possible for you to create virtual dynamic groups of streetlights, allowing you to update a certain parameter for those specific node groups all at the same time, for example, turning on/off lights in a specific area of the city, adjusting the colour of the lights, adjusting the dimness, and more. This makes maintenance and management of the network much simpler.

Furthermore, Multicast increase the reliability of the network due to its simplicity. It does not require sophisticated routing tables, advanced network management, or emergency network healing-procedures for re-routing data packets. It maximises the efficiency of wireless data transmissions by reducing the overhead for conveying routing information. As a result, it allows for keeping the size of data packets as small as possible, which is critical in a high-density smart lighting network.

Multicast also offers stronger resistance to interferences. Since messages are propagated simultaneously along multiple paths, the messages should be able to reach their recipients even if several paths in the network break.

RIIM is Radiocrafts’ wireless industrial IP mesh solution which was designed for you to easily create your own industrial grade access network with direct IP connectivity. RIIM includes an implementation of MPL that enables our customer to use these latest advances in mesh technology. Radiocrafts tested the multicast feature for RIIM in our latest street lighting simulation. Our street lighting simulation using RIIM is a simulation that fulfills various application scenarios requested by some of Radiocrafts’ customers.

In this simulation scenario, which was run over a period of 24 hours, 5 multicast messages were sent from the border router to the nodes. The test result confirmed that in a network structure with 20 mesh hops, the total time for all devices to receive the multicast message was around 30 seconds. Through this we enable our customers to send one-to-many messages in an efficient and very reliable manner.

You can read more about the street lighting simulation in our application note, AN038: Performance of RIIM in Street Lighting Network: Simulation Results.

If you are interested in RIIM for your own street lighting application, why not test the network by buying a RIIM Development Kit?

A large mesh network can have hundreds of nodes where sometimes, a collective message needs to be sent to all devices or a large group at once, for example, to turn off all the lights in a street lighting application. A multicast protocol enables the message to be sent once, and lets it propagate the entire network. A Multicast protocol provides many benefits in a mesh network, including: mass distribution of messages to reduce the on-air communication time, the creation of dynamic node groups to make maintenance and management of the network simpler, higher reliability due to smaller packet sizes, and more. Radiocrafts’ industrial IP mesh solution, RIIM, supports this multicast feature and has been tested in a street lighting simulation. It enables our customers to send one-to-many messages in an efficient and very reliable manner.