Do you want to quickly and easily prototype a sensor network based on a Wireless IP Mesh solution? The new Radiocrafts Sensor Board which comes with the RIIM (IP Mesh) module, the complete associated support circuits, and six different supported sensors is the solution for you.

The Sensor Board was designed to make it easy for the user to evaluate the RIIM™ module, tune the ICI application and build prototypes exceptionally quickly. 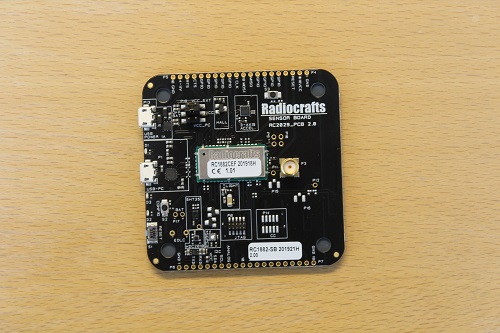 RIIM™ (Radiocrafts Industrial IP Mesh) is an embedded RF system designed to be an all-inclusive, easy to use mesh, with direct IP addressing from sensor to cloud. RIIM™ includes an Intelligent C-programmable I/O (ICI), which makes it possible to directly interface to any sensor or actuator, and, it supports Mist Computing. Read more about RIIM™ here.

The Sensor Board includes six of the most common industrial sensors which are used in many different applications and a controllable LED to demonstrate GPIO controls.

The ICI “limitations” are really just defined by the designer’s creativity!

So get your own development kit and start using the sensor board to prototype your very own RIIM™ sensor network!

Read more about the test examples you can use for the sensor board here.