When a customer wants to design a wireless mesh network(WMN), it is harder to predict how the network will behave compared to regular star network. And two identical networks do not exist. Parameters that differ from case to case are:

Since each case is unique it is a challenge to answer customer questions like “how often can we send data?” or “what is the latency?”. To get these results there are two options: Either build up a test network and verify the behaviour or simulate your network. The latter is fundamentally quicker and lower cost.

Therefore, in this blog topic we are going to give you an overview on wireless mesh networks, the challenges that come with deploying a WMN, how simulation in the early design phase of the project can dramatically increase the feasibility of the project, and finally, showcase a simulation example which Radiocrafts has performed with our wireless IP mesh network, RIIM for an industrial control use case (Solar plant farms).

A wireless mesh network is an infrastructure of nodes that are wirelessly and automatically connected to each other. These nodes piggy-back off each other to extend a radio signal route, relay, and proxy traffic to/from leaf nodes. Each node spreads the radio signal a little further than the last minimizing the possibility of dead zones. There are two types of wireless nodes, namely, mesh routers and leaf nodes. Each node forwards the packets on behalf of other nodes that may not be within the direct transmission range of their destination. This path redundancy is a robust feature of mesh topology.

The mesh routers can be freely organized into any network topology and still communicate with each other. They can forward data to and from its parent nodes to its child nodes. The mesh router nodes collect and forward data to local sensors and actuators. They also serve to extend the network if needed. Leaf nodes on the other hand, sit at the end of the network and have no mesh routing functionality. They collect and forward data to and from local sensors and actuators up to its parent node. Furthermore, you have the gateway/border router node which is the root of the network and connects the network to the outside world. 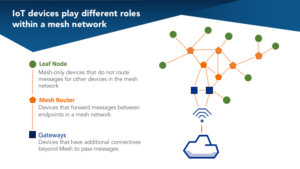 A wireless mesh network offers low up-front costs, reliable coverage, easy network installation and maintenance, and dynamic self-forming, self-healing, and self-optimizing features. These benefits have attracted bountiful attention from both academia and industry in recent years as these are ideal benefits for the next generation of wireless communication systems.

WMNs have become popular due to their universal networking capabilities. They support a wide range of applications such as construction site monitoring, solar plant and windmill monitoring, security systems, and much more.

The installation of a mesh network is fully automatic; however, it does come with its own performance challenges depending on the dynamicity of the network environment.

Trade-offs that come with deploying a Wireless Mesh Network

When design and deploying a Wireless Mesh Network there is number of choices the network owner does.  And all choices that is done has an impact on the solution.

Example, if a user wants 1000 nodes and a battery-operated mesh routers, then this will lead to a network of low data capacity and high latency.

If a user wants to deploy many mesh routers with short distance between devices, this give a more reliable solution, but also a more costly solution.

The general principle applies, that “there are no such thing as a free lunch”

After the user selects the key parameter to optimize toward, the challenge remains on predicting behaviour. A key here as that the positioning of nodes the link quality between them have a degree of randomness. So, one must make some assumption on distances between nodes, walls between them how many neighbours each node has connection to etc.

These reasons and several others are why simulating your desired network is essential in the early design phase of the project.

Building a real experiment on a testbed can be very costly, time-consuming, and difficult as repeatability of the test scenario is largely compromised since there are many factors that would affect the experimental results at the same time, it is hard to isolate a single aspect.

Additionally, the cost of simulating high node count networks is very low and the simulation can be finished within a very short execution time.

Running a simulation allows the user the freedom to assess the scalability and appropriateness of a project without the constraints of a hardware platform. Furthermore, it can be used to simplify the software development process for a network.

Radiocrafts has performed various simulation scenarios for customers as well.

We often get questions from customers wanting to use our modules, such as, “how often can we send data?” or “What is the latency?”. The answer is almost always, “it depends”, because the customer needs to know how many nodes they want to deploy, what network topology they want, how dense they want their network to be, and more.

Radiocrafts can create network simulations for customers! We have the ability to simulate wireless mesh networks with our IP mesh solution (RIIM) in any type of use case to get a better understanding of what kind of network performance a customer can expect from a certain kind of network configuration.

We have an example of a customer who requested a 67-node simulation for a solar plant farm application using RIIM. 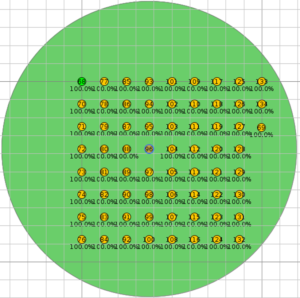 The topology consisted of a dense 8 x 8 + 3 node TSCH-based (Time Slotted Channel Hopping) network with equally spaced nodes. The top left node marked in green is the border router, and the yellow nodes are mesh routers. The green circle is the radio transmit and receive distance from node 96 (node in the middle with a blue border); a node can talk to anyone within a 6-node radius. The mesh is a sensor data collection network in an industrial control application, where every node sends 20 bytes UDP status data every 20 second to the border router. We simulated for one hour, where the nodes were powered on at random within a 20 second interval in the beginning.

The main challenge in this network is that the combination of high density (almost all device can communicate with all the others) and high frequency of data transmission (in average > 3 sending per second) could give a lot of packet collision. Due to this a simulation was important to verify if the network got packet congestion or not. 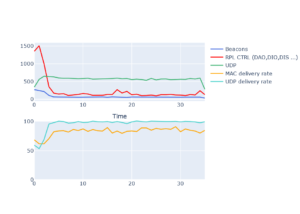 In the beginning we see a lot of RPL control packets due to the network setup and initialisation phase. After the setup phase we get a stable UDP delivery rate of 99.5%.

It is hard to predict how a wireless mesh network will behave as there are so many factors to take into account when designing your project, for example, the network topology, what kind of latency you need, the data-rate, and more. Additionally, your network connectivity and stability depends significantly on the location of your mesh routers.  These reasons and several others are why simulating your desired network is essential in the early design phase of the project. It is cost effective, faster, and much more flexible than arranging a real experiment. Radiocrafts can create network simulations for customers with our IP mesh solution (RIIM) in any type of use case.